A few weeks the Sanderson Center for the Deaf and Hard of Hearing put out a call for people to come to the state capitol for a show of support for their services and programs. They mentioned they had interpreters available. I’m learning sign language slowly but I’m not near good enough to understand through an interpreter so I asked if they had CART available. There was a day of scrambling but they pulled it together for me.

The session started at 2:00 and the center’s CART person, Julia, also works at the University wouldn’t be out of her class until 2:30.  That’s okay because I like Julia plus knowing in advance helps and what I was mostly there for was a show of support. They decided remote CART would be the fastest solution instead of her traveling to the Capitol eating up more time. The Sanderson Center went into gear contacting the legislature to find out about live streaming and wi-fi. They came up with a link for Julia to listen to the session so she could do the CART notes miles away at the University. Then she sent us a link for us to go online and read her notes.

At the legislature, we had seats reserved up front for a good view of the two interpreters and the senators and house reps. Someone came in to make sure we were properly hooked up to the wi-fi. The director of the center had her iPad and I had my iPhone. The session started.

I spent the first half hour observing the proceedings and watching the interpreters to see how much I might catch from them. Like my hearing, I only catch a few words here and there. The senators and house reps were behind big desks and computer monitors so only the tops of their heads were in view. Lip reading wasn’t an option. The guest speakers sat facing toward the desks so again, no lip reading possible from the person who had the floor either. I didn’t understand much so I read my email and the handouts instead. So The first half hour didn’t have much to do with our center luckily.

I kept checking my phone to see if CART had started. Julia and were in touch via Facebook chat and around 2:30 she asked if there wasn’t anything coming though. No. (A moment of panic from me and I’m sure her too.) There was a small glitch but she fixed it and had it going by 2:45. 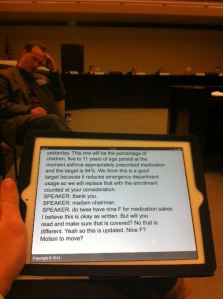 Now I had captions to the proceedings and it totally thrilled me. In fact, I was a CART hog. I held the iPad (sitting between two other hard of hearing people) watching the captions and had it set up on my phone as well because it was there and available. I watched both screens and kept them going. I can’t tell you how much CART makes me feel included and involved. 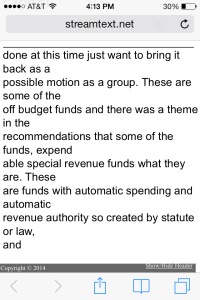 Other people’s hearing ability amazes me. Julia knows when someone different starts talking and she drops a line with a header saying ‘speaker.’ (If she knows people, she adds their name but here she’s typing blind.) I suppose that’s normal for everyone but it blows me away. She’s listening to this from the University and knows when it’s someone different talking. Me? I can’t tell and I’m in the room where they are talking. Often I’d look up from the captions to find out who was speaking and it took several seconds for me to locate whose mouth was moving or head bobbing if they were looking down.

A man had the floor and gave an acronym his agency had adopted. A rep spoke up saying, “Thank you for yet another acronym.” His comment was delayed in the captions (there’s always a few seconds delay) so I didn’t understand the laughter right away but when it showed up on my captions, I smiled too. That sure beats the many, many times in my life where I sat quietly not understanding while others laughed around me. This time I got it and I don’t care if I’m a few seconds behind everyone else. Another round of laughter came up later about extra funds not being spent because it’s like extra money in your checking account you can’t spend…because it’s your wife’s money. It’s incredibly nice to included via captions.

At the end of the session on Friday, one of the house speakers thanked us for coming and thanked the two sign language interpreters for being there. There I sat with invisible accommodation and Julia’s hard work unnoticed except by me and two others who were very grateful for her service. This was my first legislature experience and it was only possible with CART. Without it, it would be nothing to me, sitting in a room with a bunch of people. With it, I felt a part of it and it enriched the whole experience. Instead of an outside observer, I was a witness.

A great big thanks to Julia for making it possible for me to understand.  And I’m so happy to be alive with today’s technology.

The Hearing Loss Association of Salt Lake City (HLAA-SLC) is a non-profit geographic chapter of the Hearing Loss Association of America (HLAA) that is devoted to the welfare and interest of those who cannot hear well, but are committed to participating in the hearing world. As such, we are a hearing loss self-help group committed to the enjoyment of and improvement of sound through technology, medical advancements, education, and peer support.

Due to COVID-19 our meetings will be virtual on Google Meets.
When it is safe again we will return to Sanderson Center for the Deaf and Hard of Hearing
5709 South 1500 West
Taylorsville, UT 84123-5217
hearinglossutah@gmail.com
As of 2020: We will continue to meet online the third Saturday of the month 10-12, with the exception of July